Distance from Routes via bicycle: 25 Minutes 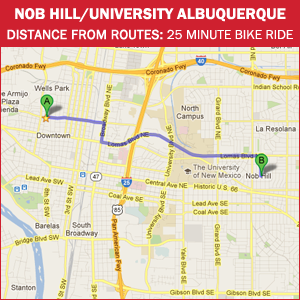 Established in the 1930’s as Albuquerque’s first upper-class suburb along Historic Route 66, the Nob Hill / University Neighborhood is today a vibrant urban shopping and entertainment district with an architectural style that harkens to the art deco era (as specific, of course, to New Mexico). The community embraces local and eclectic arts, crafts, cuisine, and services together with the ever-present undercurrent of the Route’s neon past.

Visitors to Nob Hill can shop for vintage furniture and neon signs, Japanese pop-art and southwestern-styled paintings, vinyl records and fine ceramics; and enjoy the city’s largest density of eclectic restaurants and eateries which cater to all price ranges.

Take in an independent film at The Guild Cinema / live performance at the Lobo Theater, preceded or followed by local microbrews, pizza, sushi, gelato, or espresso at a nearby late-night restaurant or bar.

Ride through the beautiful 600-acre University of New Mexico campus (no cars are allowed beyond the main campus loop), and stop for a picnic beneath willow trees at the school’s large duck pond and creek. Whatever your style, Nob Hill is a perfect match, from quirky to upscale and all shades in-between.

Nob Hill is accessed via bike lanes on Albuquerque’s Lead or Coal Avenues, or via a quick ride east on the sidewalks of Route 66 (Central Avenue) from the downtown area. Note that this ride involves an uphill grade.

Nob Hill is serviced from the downtown Alvarado Transportation Center by an inexpensive “rapid-ride” bus service that can accommodate bicycles at no extra charge. 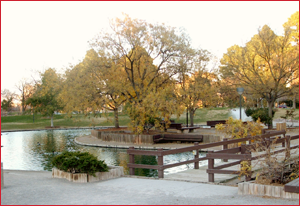 Great News! In accordance with the NM Governor’s Guidelines, we are now OPEN 7 DAYS A WEEK / 10am-4pm for maintenance, accessories, retail, and (drumroll) BIKE RENTALS!! 🤩👍

Please note: we are taking everyone’s safety very seriously and are following the strictest health guidelines:

👉 We are limiting the number of guests in our shop at one time to 5 and are still providing curbside services for overflow.

👉 As ordered by the state, everyone must wear masks at all times for both in-store and curbside service.

👉 We have hand sanitizer available for guests and our team members.

👉 All rental and maintenance bicycles are sanitized when they arrive and before they go out for everyone’s safety.

Because we care about you – please help us follow these guidelines and if you are not feeling well or are in a vulnerable health group, please consider staying home.

We have chosen to hold off on our bike tours until June 1st to best be prepared for everyone’s safety.

Stay well and ride on, friends! We will see you soon!